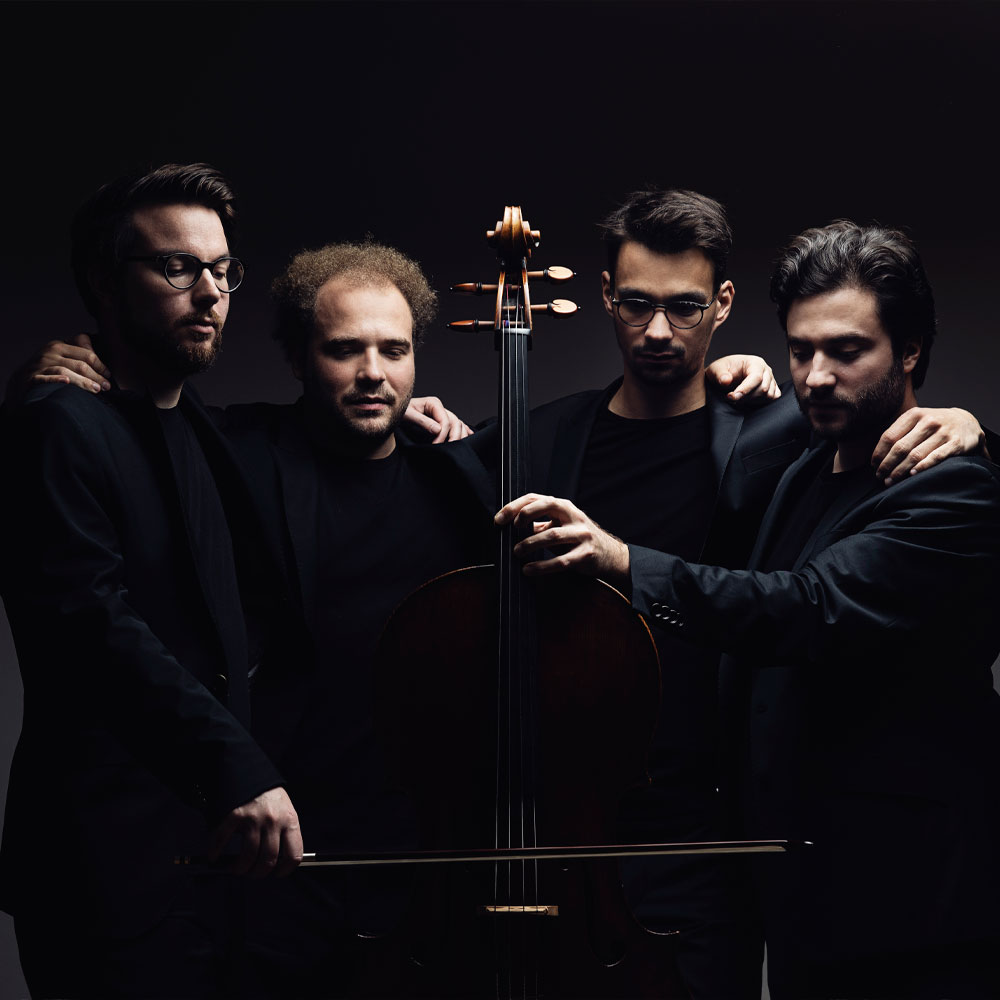 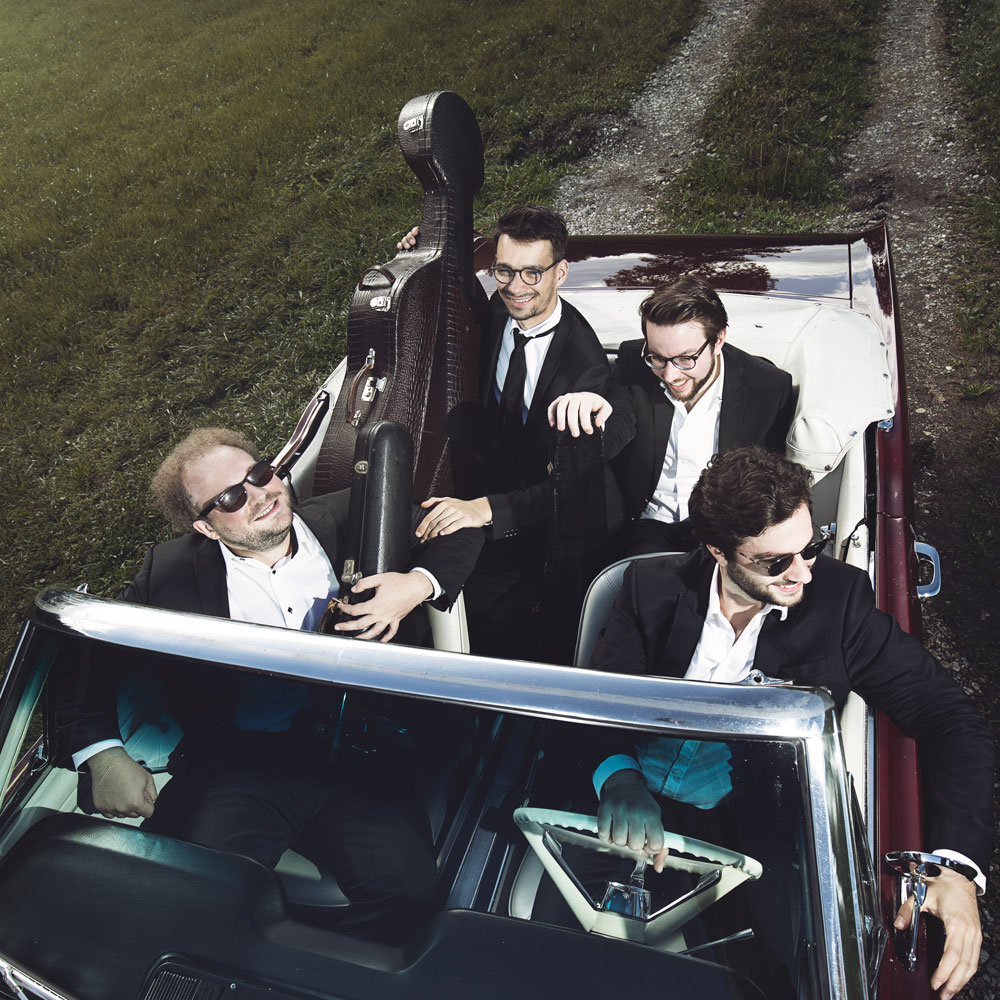 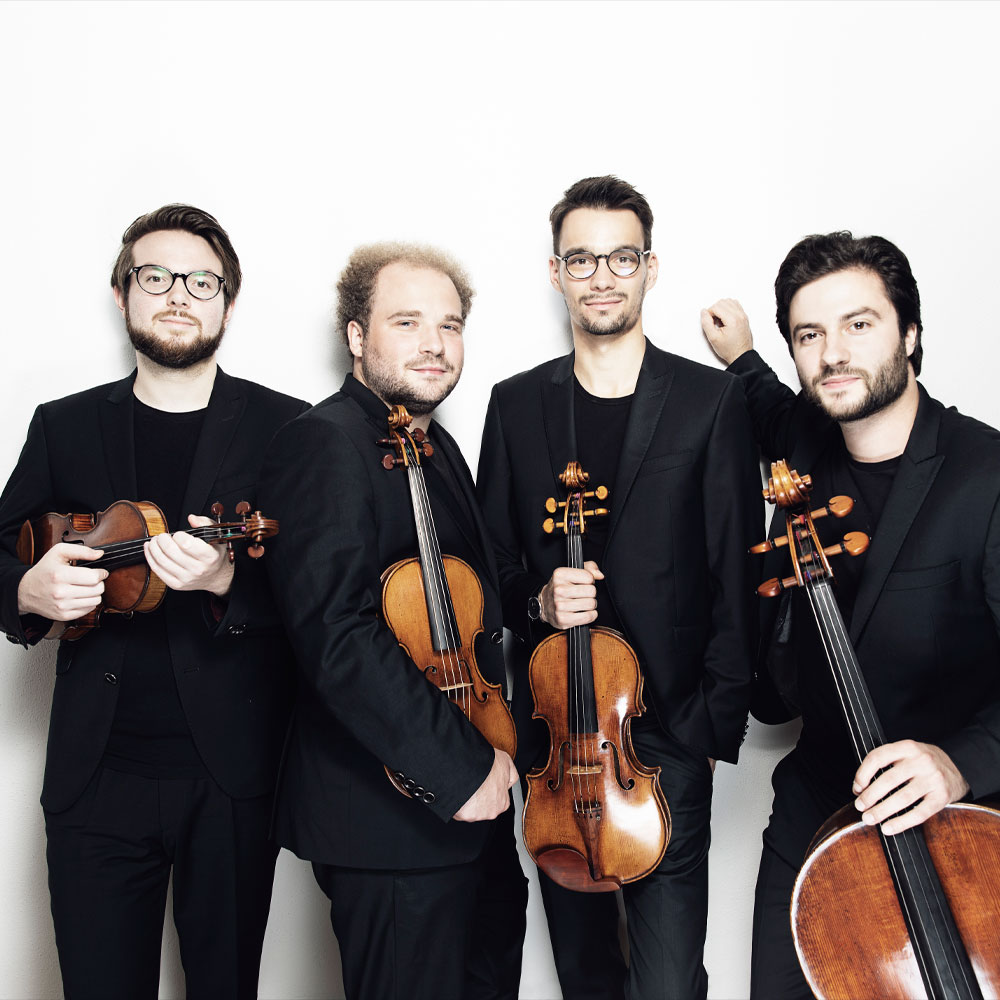 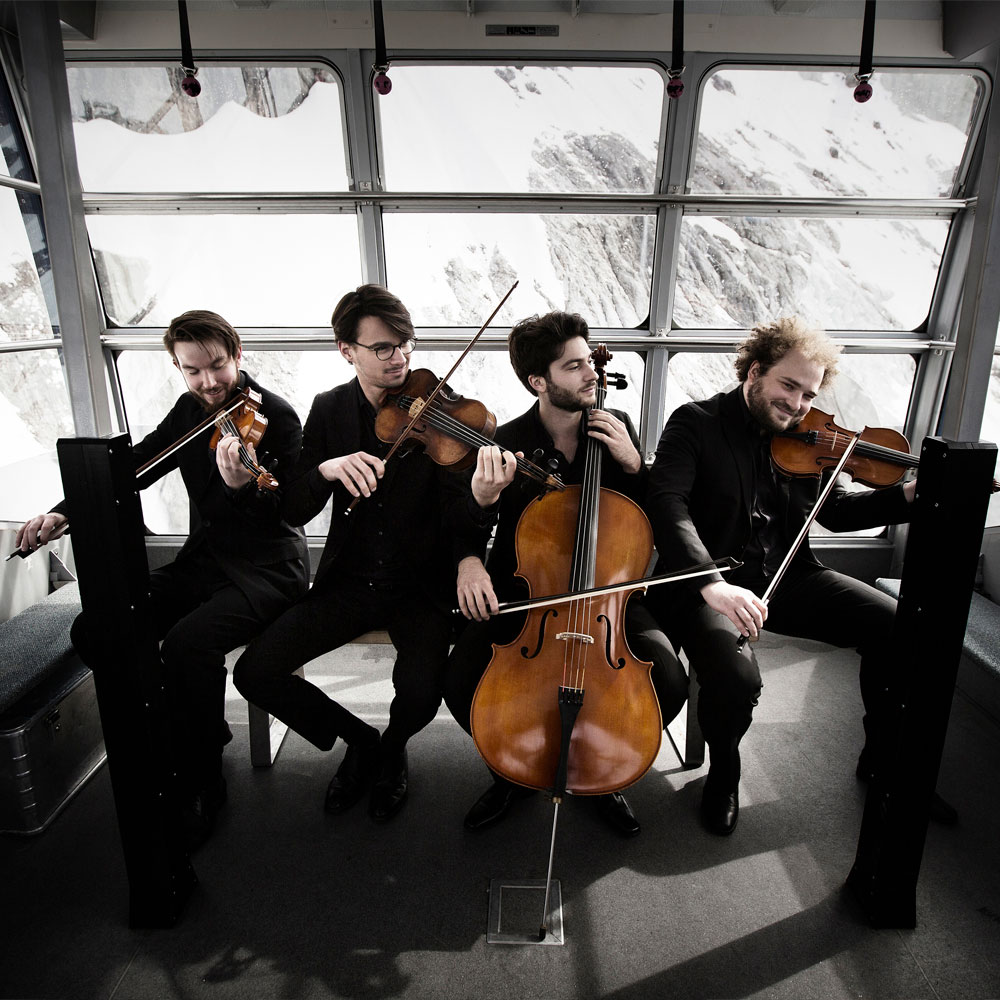 The Goldmund Quartet is known to feature exquisite playing (Süddeutsche Zeitung) and such multi-layered homogeneity (Süddeutsche Zeitung) in its interpretations of the great classical and modern works of the quartet literature. Its inwardness, the unbelievably fine intonation and the phrases worked out down to the smallest detail inspire audiences worldwide.

In keeping with the theme of their current CD Travel Diaries, the past season was marked by international travel. The Quartet travelled to Colombia for the Cartagena Music Festival and toured the US with stops in New York, Boston, Kansas, Tucson, Salt Lake City and Montreal. Back in Europe, their busy schedule took them to Italy, France, Sweden, the Netherlands and Denmark.

The 2022/23 season features a firework display of musical highlights. A tour of Japan by invitation of the Nippon Foundation is followed by the Quartet’s debut at Gewandhaus in Leipzig. Performances in Padova and at Teatro Reggio Emilia lead the Quartet to Italy while performances of Chausson’s Sextet with violinist Noa Wildschut and pianist Elisabeth Brauss are scheduled in Holland and Belgium. In the second half of the season the Quartet follows invitations from Sociedad Filarmonica in Bilbao and the Hemsing Festival in Norway before concluding the season with recitals at Berlin Konzerthaus, Prinzregententheater Munich, Musikverein Graz, Mercatorhalle Duisburg, Mönchengladbach, Bensheim and the Marvão Festival in Portugal.

The winners of the renowned 2018 International Wigmore Hall String Competition and the 2018 Melbourne International Chamber Music Competition have been selected by the European Concert Hall Organisation as Rising Stars of the 2019/20 season. Since 2019, they have been performing Antonio Stradivari’s Paganini Quartet, provided by the Nippon Music Foundation. In addition, the quartet was awarded the Jürgen Ponto Foundation Music Prize in March 2020 and the Freiherr von Waltershausen Prize in December 2020. In 2016, the quartet was already a winner of the Bavarian Arts Promotion Prize and the Karl Klinger Prize of the ARD Competition.

In 2020, Berlin Classics released Travel Diaries, the Goldmund Quartet’s third album with works by Wolfgang Rihm, Ana Sokolovic, Fazil Say and Dobrinka Tabakova, which Harald Eggebrecht described as “one of the liveliest and most stimulating string quartet CDs of recent times”. (Süddeutsche Zeitung). Their Travel Diaries are the musical diary from their last decade together and a sound document that is both reflective and forward-looking. 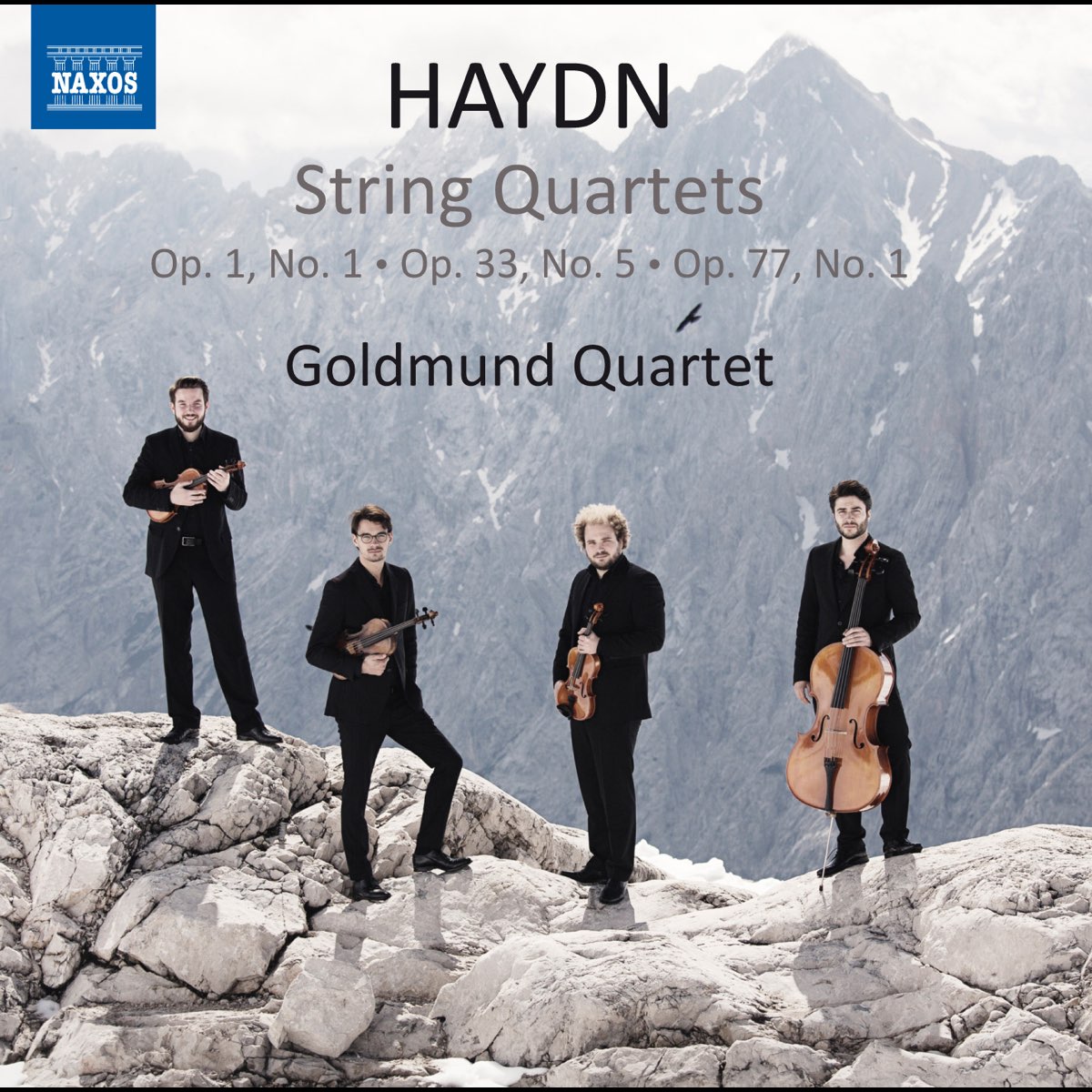 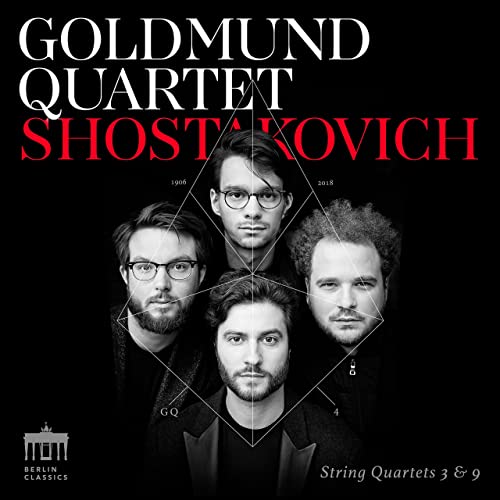 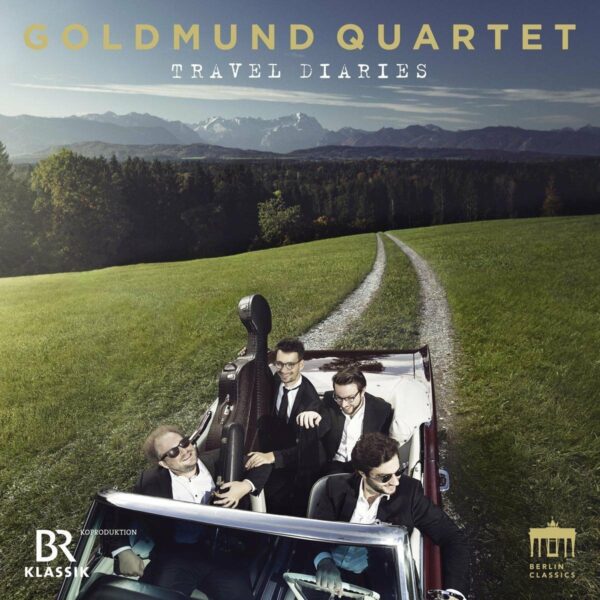 Marén Artists welcomes one of the most outstanding string quartets in Europe, the Goldmund Quartet. Winners of some international awards, the quartet studied at the Reina Sofía School of Music,…
Read More